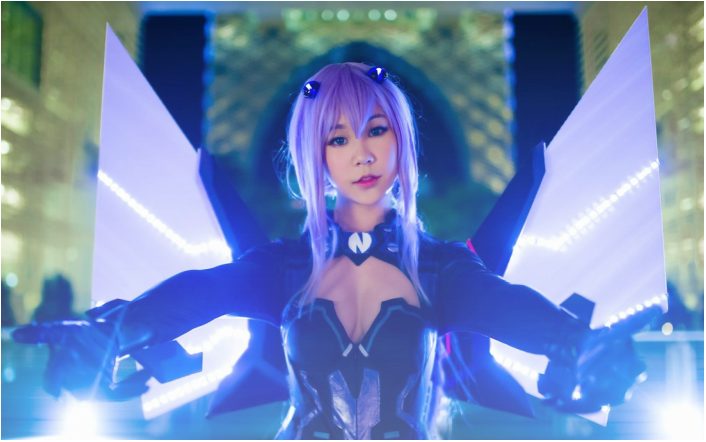 Purple Heart by Ara Yoake Hikaru | Photo by キヰラ Kiwira
Hello! Thank you for visiting my site! Allow me to introduce myself.
My screen name is Ara Yoake Hikaru, and I have been cosplaying since December 2011. My first cosplay was at the biggest ACG event in Malaysia known as Comic Fiesta. I cosplay characters whom I share similar traits with, as it is easier for me to understand and portray them efficaciously. I make an effort to perfect my cosplays as I consider it as a tribute to my favourite characters.

Since the start of this cosplay journey, I have been featured in written media such as the Star Newspaper, New Straits Times, CutOut Magazine, and so on. I have competed in several cosplay competitions, and have won a fair number of times. I have been invited as a guest to ACG events, and even as a cosplay talent. I think I can consider myself as a part-time professional princess since I've also been working as a Disney princess/queen for several bookstore events, namely for Popular and Borders.

I got into cosplaying as it was an outlet for me to express myself since I was sort of an introvert (still am). Cosplay enabled me to come out of my shell more, as I had to get used to random strangers walking up to me to have a picture taken or to simply talk about our favourite series. In my opinion, cosplay is one of the few mediums to unite ACG fans around the world. Now, I look to cosplay as a method to develop my creativity, communication, and problem-solving skills.

Before getting into cosplay, I only ever knew of the existence of computers, the Internet, and trading card games. At a young age, I was raising Pokémons, challenging other players (both virtual and non-virtual), collecting badges and trophies in competitions instead of playing with dolls, which most girls my age then would have done. Ah, the days of boys exclaiming "I lost to a girl!". The Pokémon journey was short-lived (it continued virtually) as I had to focus more on my studies, and it was getting too pricey to have a good deck.

Later on, around the age of 12, I got involved in the MMORPG world. I got hooked quickly, and was literally the youngest female player in CabalSEA at that time. I enjoyed dungeoning and going to war zones. Being the 'toufu' (easy to kill) I was since my settings were different from conventional FAs, I was always being chased by players. Did I mention that being a 12 year old girl, I was able to secure Top FA spot in Nation War? I later moved on to AikaSEA where I was the most cursed player in Elter Battle Arena (for keeping the opposing team with about 10 players on a solo wild-chase). To those who played the same games, my IGN is dawnxhikaru. Yes, that irritating FA/DG whose name you would see in the shout chat. Now, I'm just a Mercy getting cursed at for clutch resurrects in Overwatch.

This went on for about 4 years, when again I had to stop to focus on my studies. To occupy my free time, I got into excessive reading. I could read a book within a few hours. That's when BigBadWolf Booksale played a big role in my life. I have been attending it since its first year, and have bought around RM 2,000+ worth of books since.

Aside from all those, I also enjoy listening to music, no matter the genre, as long as it is captivating enough. I also watch Korean Dramas, Japanese Animes, and TV Shows. I enjoy eating sweet food, and have an affinity with animals. I also spend hours watching YouTube videos. So yeah, I am pretty much all over the place. Rather than having them as a distraction, I use them as motivation.